Most crucial factor for effectively learning a programming language are below.

I was recently looking to learn more about javascript and came across Exercism.io. Exercism.io offer a solution for all above factors and is free of cost

All language track will have a series of exercises starting with very basic hello world program and then moving to complex concepts. User should download the exercise , which will have a failing test suite. Once we implement the code and ensure test cases are now passing , we can submit the code for mentor review. Mentors review the code and suggest better ways of doing it, if any. Exercism.io will prevent us from jumping ahead and force to complete one exercise before moving to next one. This actually helps to follow a structured learning path .

Some of the language track doesn’t support Mentored mode initially . For those tracks, user can join in practise mode and then move on to mentored mode.

Recently I was looking for some code for sending emails via SMTP in C#. Below are few links which I found with some reusable code. Overall it looks fine , but have to include multiple validations for error handling .

In Nutshell, flow is as below

Above gist links have some reusable code to achieve step 3 of above.

Recently one of my colleague approached me asking to help on creating a utility tool using selenium web driver. The requirement was simple which includes accepting few arguments from the command line and then open a browser and complete some actions on browser based on inputs provided. Having worked on selenium web driver for a few years, I thought this is relatively simple and can be done quickly.

It is implemented as a C# console app which had reference to selenium web driver. It accepts few arguments from command line and based on the values it opens up chrome browser and completes the action. The initial version was already there on which I made some modifications. We gave a demo to the user and thought it is all done.

As in any normal software projects, it was far from over. There were additional requirements to support multiple browsers, flexibility to provide arguments in any required order, the requirement to display detailed help text so that end user will know how to use the utility tool. All of them was done and we shared the build output, which included the exe file, all dlls used, drivers for various browsers and configuration files. That’s when I had my next requirement to make it as a portable EXE with the single exe file. That is not something which I had done before. Hence I spent quite some time to google and read through various approaches.

Costura is an addin for Fody. It helps to embed all assembly references into the output assembly/exe. Details documentation and source code can be found in github. Usage was pretty easy.

This helped to combine all dlls like webdriver, newtonsoft dll etc into the utility exe file. The build output had only an exe file, config and other resources which I marked to copy to output.

Fody.Costura helped to combine exe files with required dlls and there by reducing number of files which needs to be distributed. However, I still had few text and json files which are resources for this tool. Initially, all required resources were copied to output and were accessed from there.

There is an option to embed all required files. It is done by changing BuildAction in properties to Embedded Resources. This will include files in output assembly which can be accessed in code.

This webpage has more details about how it can be done.

Below code snippet will show how it can be accessed. This shows how to read a resource file called Help.Txt

After completing above two steps, I was able to combine all dlls and other required files into the Utility Exe. Now I just had to distribute exe file and the drivers for various browsers.

I recently faced an issue where one utility tool created by me was not running properly on another machine which had different dot net version installed. During troubleshooting, I was looking for ways to identify the installed dotnet version. Most of the links in google suggested to look for release value in registry as specified here.

Below powershell script will list down installed dotnet version on a machine. This is based on dotnet version listed on https://docs.microsoft.com/en-us/dotnet/framework/migration-guide/how-to-determine-which-versions-are-installed. We may have to update below snippet as when new versions are released. Currently it supports upto dotnet 4.7.2

Note: This assumes user can run Powershell with admin access so that it does not go through constraint language Mode . If running above script result in error like “Method Invocation is supported only on core types in this language mode”, it means it is on constraint language mode. In that case, we can run just Get-Childitem "HKLM:\SOFTWARE\Microsoft\NET Framework Setup\NDP\v4\Full" and manually look for release key in above microsoft link

I was hosting my blog on github pages for past one year. Last week I decided to move hosting of my blog to AWS S3. There are obvious advantages of hosting a static site on S3. Moreover the cost of hosting is also minimal. There are many blogs in internet which explains the steps for hosting an octopress blog on S3.

Since this is my first exposure to AWS world, I did had a learning curve to get this done. Below are highlevel steps involved in hosting in S3.

While playing around with AWS, I noticed that AWS codecommit is always free for normal user ( eventhough usage limitation apply ) . I found that usage limitation is pretty high and I may not have to worry about that. Hence I decided to use AWS code commit for keeping blog’s source repository . (Partly because Github doesn’t support private repo on free plan). Process was straight forward as we do with any other source control system like Bitbucket, gitlab or github. Only catch I found was , we need to seperately create Https Credentials/SSH keys for AWS codecommit in IAM. The user name and password is different from normal login. Once everything was setup, I just changed the remote repository details on my local and pushed it through.

Recently I had to find a way for running a command line process in server. I had to spend fair bit of time googling for various approaches of doing it. Most of them are by using PSExec. However there is another approach of using WMI (Windows Management Instrumentation) . Below is one of the approach , which I found at msdn blog.

Below method can be accessed anywhere by

The solution has multiple parts as follows

Code below is taken from above MSDN link ( Just to make sure it is available for me even if original MSDN link is unavailable in future.

Code snippet for running power shell on a remote machine. Loosely based on blog post here and here

Below is code snippet for working with windows service. It helps to find status of service, start , stop and restart as required.

We need to pass in details of windows services name ( as shown i services.msc ) and machine name(should be in same network).

Code snippet for comparing two xml files without using xsd for validating their structure is same ( nodes and arguments should be same. Values of each node/argument can be different).

Cypress is not just UI automation tool . It can be used for testing APIs as well . Even though we have other tools like Postman, Newman, Rest Assured, SOAP UI etc for testing APIs, I believe cypress is a good alternative for testing API. It will help to use same tool for both UI and API test automation.

Let us look at a sample API test case. In below example, we trigger a API call to http://services.groupkt.com/country/get/iso2code/AU and validate below in the response.

We can then extend this to do any further checks if needed.

Create a new file inside Integration folder of cypress and copy below code into that.

Open Cypress by running node_modules/.bin/cypress open inside cypress root folder. This will open up Cypress. 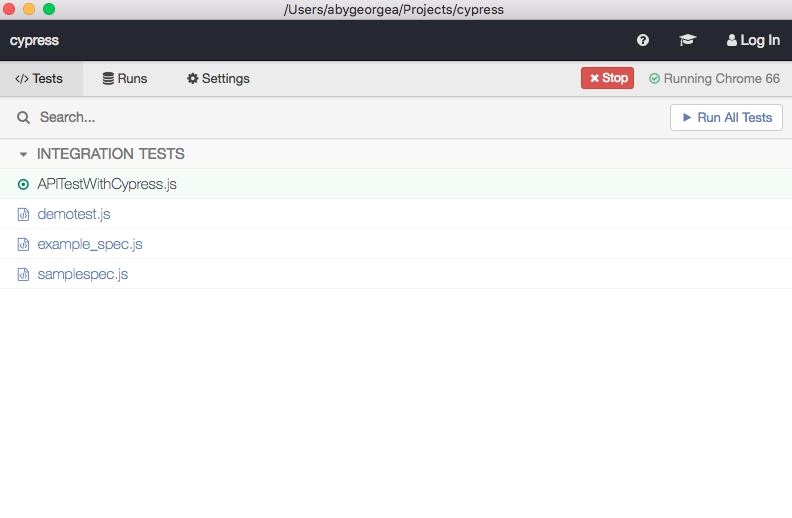 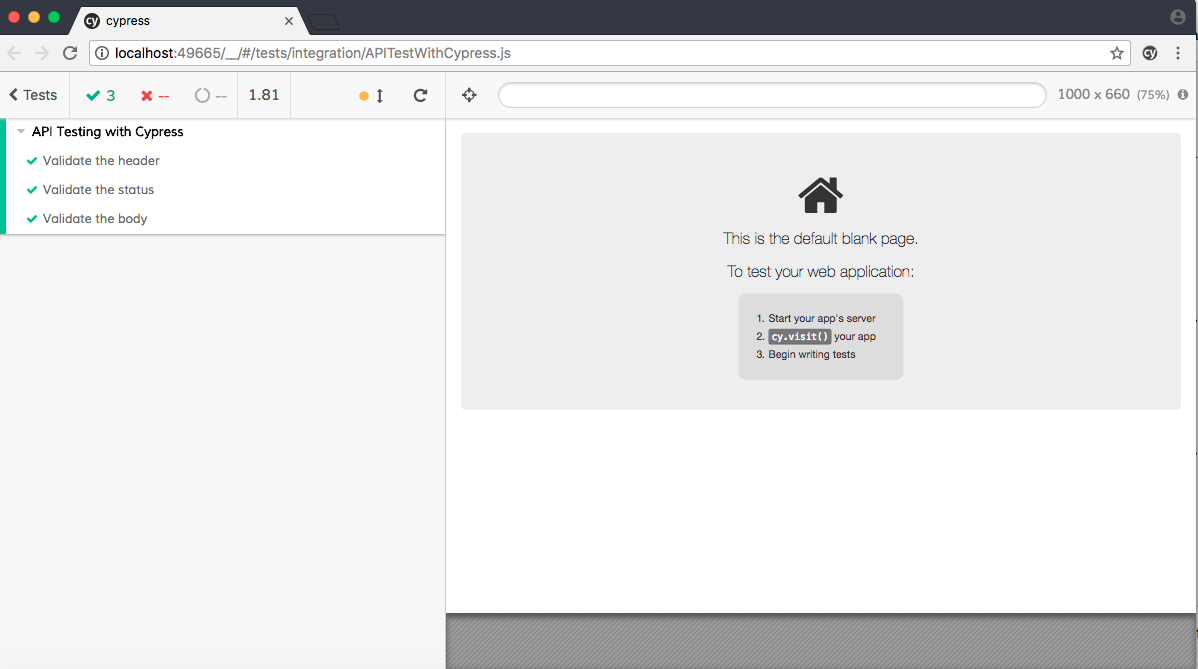 Expand each of them and right click on the asserts and inspect the element. This will open up chrome developer tool. Select the console tab , which will list down details of calls made, request received and assertions performed. It will help to write additional assertions, investigate any failure etc. 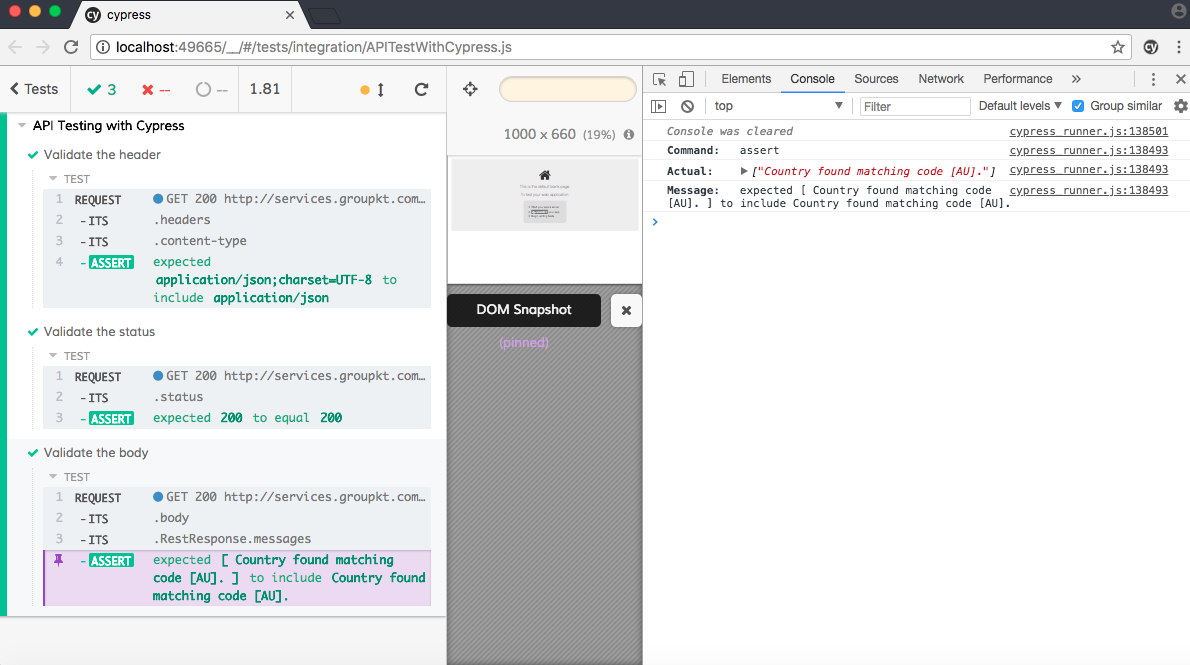